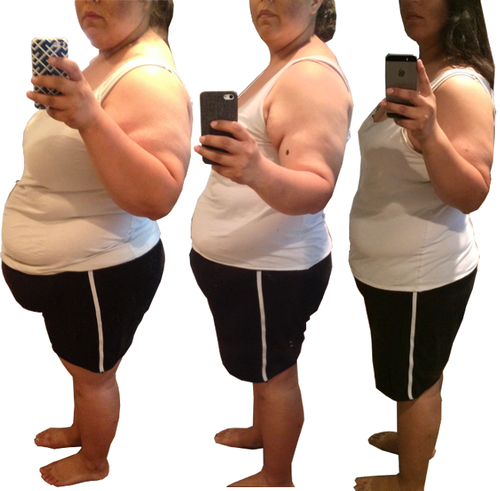 I’m fighting my natural self preservation instinct by posting these pictures. I’m doing this to cement my goal (now that these are public I’d better not quit…) and to hopefully reach someone who might need the encouragement.

1st photo was taken about two months into my “journey” on July 2nd 2013 when I weighed in at 290 lbs. I took the next photo on October 2nd 2013, weighing in at 243 lbs. The last photo was taken yesterday and I currently weigh 205 lbs. (Note: I tried to make sure that all 3 of the photos were the same size in order to make an even comparison. The photos were taken at slightly different angles but I got them as closely even as possible. The 2nd set of photos is the same as the 1st set except I stacked them on top of each other and changed the color to see the difference better.)

Seeing these photos side by side makes it much easier to understand why I have so much more space in the drivers seat of my car. The size of my under-belly has really shrunken down! Not to mention the loss of my boobs. My arms seem to have shifted in size as well. Oohh, and my face, it’s less chunky too.

There are days/weeks when the scale won’t budge and I’ll start to feel like I’m getting no where. I try to stay positive and remind myself to be thankful for the fact despite how slowly I feel the progress is, at least it’s not going to take me as long to LOSE the weight as it did to GAIN it over all those years. I plan on reaching my goal sometime later this year but even if I don’t get there in time I know I’ll get there eventually. Being patient doesn’t come easily for me.

And if you’ve found this post via a tag-search for weight loss and you’re curious to know the “how” of my story, it’s simple. Whole foods and walking. Cook your own meals and go outside and ride your bike. I started out by buying myself a treadmill because I was too self conscious to go outside and walk in public. I’ve since sold my treadmill but I would encourage anyone starting out to do anything they can to accommodate their personal needs. Do whatever you can to get yourself moving. Repeat to yourself “I’m worth it.” because it’s true. Whatever your motivation is, make sure you include the fact that you are worth the effort.