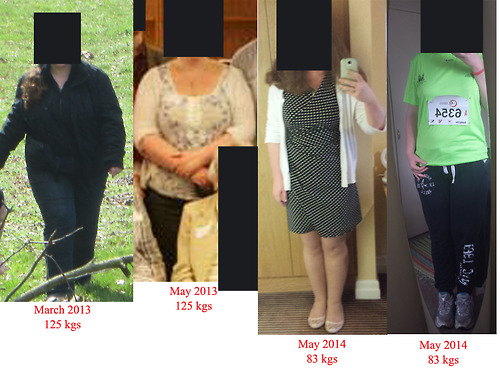 I submitted before, but just found a photo of me from a year ago and I have to say, it’s hard to look at. I never realised at the time exactly how big I had become. I’m 5ft 7” and in the last year I’ve lost 42 kgs or nearly 93 pounds.

I started Alternate Day Fasting at the beginning of June last year, when I weighed 125 kgs or nearly 276 pounds. I had always struggled with my weight and had lost weight before but never kept it off. I was unhappy with how I looked, with not being able to buy nice clothes, and worried about my health and about my boyfriend becoming unattracted to me. I got a really bad spate of eczema on my arm and that was the catalyst. I did a 9 day detox which cleared up the ezcema and lost a stone in weight. (6 kgs or 13 lbs.)

So I just decided to keep on going. I ate 500 calories every second day and every other day I ate normally enough – trying to stay at about 1800 calories. Once every two or three weeks, I’d have a cheat day where I’d let myself have pizza or chocolate… I really wasn’t that strict with myself apart from the fast days – I was meticulous about those. The weight really just fell off me. By the end of August, so, in three months, I’d lost three stone (about 19 kgs or 41 lbs.) Then I decided to start exercising. I joined a Pilates class and then in March I started running. I trained up to doing a 9 kilometre relay leg in a marathon. That’s the last picture on the right – just before it! I don’t really enjoy running though so this week I’m starting a bootcamp class – I want to keep my fitness but not be bored! The third picture is me in the first dress I’ve worn in years – a big step – showing my legs to the world!

I still want to lose another 12 kgs or 26 lbs but I’m actually happy with myself now. I can buy skinny jeans – a long-time dream of mine – and I feel good. The weight loss has slowed way down the closer I get to my goal but it is still moving. I’d just like to tone up now and not have wobbly bits on my arms and belly!

I wrote a blog for the first part of my weight loss – if anybody is interested it’s here. http://alternatedaydieting.tumblr.com/