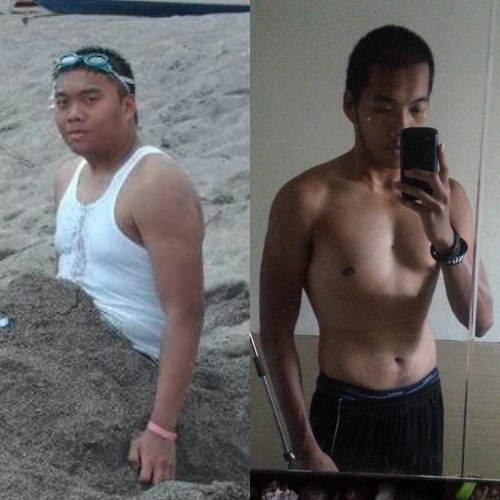 The pic on the left is how I started this fat loss journey. I was going through some issues with my life because my ex-GF left me to be with my best friend and both of them just decided to kick me out of their lives entirely. I was devastated. I would just stay in my room the whole day and in order to deal with the pain, I would eat. The sadder I became the more it negatively affected my lifestyle and I saw this physically whenever I looked myself in the mirror. My physical, mental, and emotional health was in danger.

There wasn’t a day that I wouldn’t look at myself and ask “Why am I doing this to myself?” It would always lead me to wonder what’s the point in trying. This continued until I’d had enough with feeling sorry for myself and decided to do something about it.

The Progress photo on the right took probably about a year because I would fall off the wagon one too many times. Exercise became more enjoyable the moment I joined my local gym but the biggest battle I had with myself was with my diet. This took almost forever but when I learned how to discipline myself, it was interesting because I was able to learn something about myself. Another thing that I learned was that life will throw as much shit at you and it will be up to you to decide whether it will crush you or whether you’ll fight back. I decided to fight.