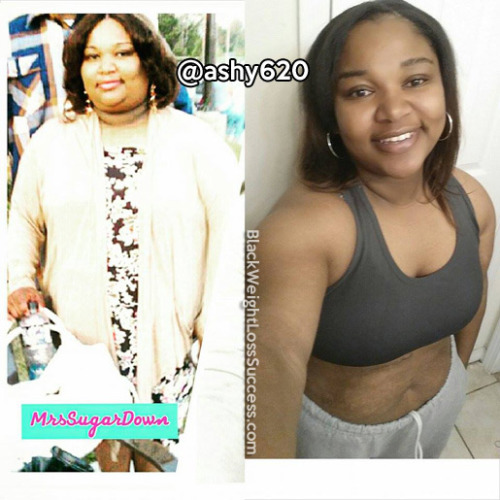 “My name is Ashley and I started my weight loss journey two years ago. While out celebrating my anniversary with my husband, I passed out. He rushed me to hospital and I was informed that emergency surgery was needed. I was later diagnosed with type II diabetes. The disease was so out of control that all my internal organs were inflammed. I went in the hospital December 2012 and I didn’t walking again until February 2013.

When I was first released, I was injecting myself twice a day will insulin. I began walking on treadmill at the gym. Today, I’m running.  The best thing invented for a diabetes is exercise. I would do 60 day challenges while eating a low carb, high protein diet. I did at least 35 minutes of cardio but generally around a hour. I workout at least 5 times a week. I also recommend eating clean. I only eat lean and green. No sodas and no sweats, except once in a blue moon

I started at 220 pounds and currently I am 135 pounds.  I have actually lost a total of 102 pounds. I started Feb 2013 and lost 91 pounds. Then I became pregnant went back to 200 and I’m currently 135 pounds. The best part is that I’m no longer on any type of medicine for diabetes and now all my tests do not represent a diabetic. I post daily videos and exercises on my Instagram account: @ashy620

The best advice I can give is don’t give up. Don’t stop, always push forward. Nothing changes without dedication, hard work and consistency.”

“My name is Ashley and I started my weight loss…
Tags: Weight loss, Fat loss, Before and after photos.