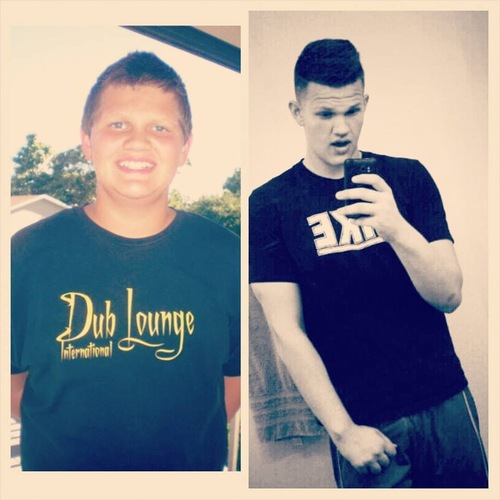 Alright I want to write a quick story about my hero: my younger brother.

You see, my brother and I both had phases where we were a bit bigger then what we were comfortable with. On the left, my brother was eleven years old. We had just moved into a new neighborhood, and kids would chase him around and calling him terrible names. One day he came to me and cried saying how upset he was because of all the harassment he was receiving. For a while, he had very low self esteem and didn’t have many friends.

After a year or two, though, he decided to flip that negativity and turn it into something positive. He got into football and,  even though he did not lose the weight right away, he began to build on his self confidence. He is now sixteen, in the right picture, and lives a very happy life after dealing with constant bullying since he was in fourth grade.

I am very proud of him, and I’m happy too see his confidence grow. If you feel like the results are impossibly far away, believe me when I say they are not. It’ll take hard work and dedication, but I believe in you and I know my brother would say the same thing.