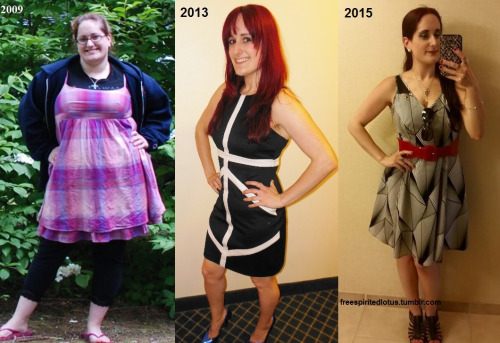 Decided it was time for a progress pic/before and after. 🙂

It’s been a whirlwind journey since I started losing weight in early 2010, and my journey is never really done. I don’t think health is a journey that ever stops, at least it shouldn’t in my opinion. I lost over 80 pounds from 2009 to 2013 when that photo was taken during my first college graduation. Two years later I graduated with my bachelors in the last photo there.

The past two years have been up and down, dealing with my studies, friends, an array of new emotions and experiences, and all still while trying to stay healthy. I wasn’t very healthy in 2013. Yea, I was around 119 pounds, but it hurt my body. I was mostly thin with not a lot of muscle. It affected by body negatively, and I developed amenorrhea for 3 months. Counting calories and the calories I burned working out was hurting my body because I wasn’t eating enough while still working out hard, and it was affecting my OCD and anxiety. My family and best friends told me they were worried. So, I got off MFP and started eating intuitively.

Since then, I became a vegan in 2014 and focused on what was going in my body rather than the numbers that I was eating. I follow this to this day, and occasionally (once every few months) will log into MFP to check to see if I’m staying within a healthy range of calories, and I am.

I’ve struggled with chondromalacia patellae for years, and it’ll be a lifelong journey. Recently my knees have been worse, and I haven’t been able to work out like I want to. So, my focus is to get my core strength back with pilates and yoga and walk when I feel my knees are ready.

There’s always a new journey in life, and we have to take it in stride. You’re on the path you’re supposed to be on right at this very moment. Open the windows, breathe in the air, feel the sun’s rays soak into your skin and remember it’s just another day. You have you’re whole life ahead of you. It’s just another day. Like my Granny used to say, “One day at a time.” ♥

Decided it was time for a progress…
Tags: Weight loss, Fat loss, Before and after photos.