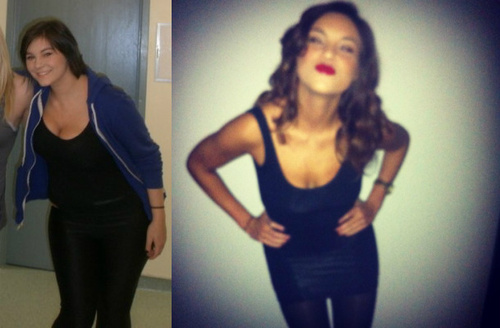 Overall it took me approximately 2 years to get where I am now and have maintained my current weight for almost 3 years.

I initially  began with small changes (changing unhealthy go to’s with more nutritious options).. a huge part of my weight loss was fueled by being unhappy and being uncomfortable in my own skin.

I was never a heavy child, I was quite the opposite, underweight most of my life and spent my time doing competitive dance and swim.

As I got older my dedication to the sports diminished and I became more concerned with hanging out with my friends and other teenagery things.

Because the exercise shift was so massive and my eating remained the same within the 4 years of high school I gained 65 lbs and an additional 40 lbs once university food became incorporated into my diet. I had never been so heavy before.

I was insecure, none of my clothes fit, I was bigger than all of my friends and people began making fat jokes when they thought I was out of hearing range.

One day after I finished my last exam and was getting ready to start my new summer job, I decided that school was over, exams were done; it was time for a change. What’s better to work on than my happiness?

I dug up an old weight watchers book from the depths of my basement dating back to high school (the first time I attempted to loose the excess weight.) and the journey began. The first year I lost 80lbs through just diet shift- I used weight watchers to help me monitor my eating choices and keep my diet balanced and my habits healthy (I come from a long line of eating disorders on my mothers side of the family; 3 generations of models… go figure) The remaining weight came off in my second year as I slowly incorporated regular exercise into my routine as well.

Weight loss is hard, and it doesn’t happen overnight, but  that doesn’t mean it won’t happen. Please feel free to contact me with any questions, concerns or just to shoot the shit and talk about whatever.
Message or send photos to us here on Facebook: https://www.facebook.com/pages/Before-and-After-weight-loss/320711868031604