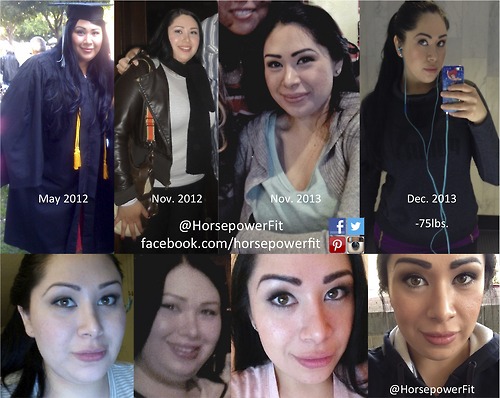 My journey to fitness began in April 2013. In the previous months, beginning almost a year ago, I tried and failed to regain control of my eating habits and workout routine. But in April, I finally made a decision that would change me for the rest of my life.

I have lost many things in life, but what I have lost, I’ve gained in mental, emotional, and physical strength. I feel powerful, empowered, and I feel like I need to share my journey. I was always an athletic person growing up. I played basketball very well as a teen, and I absolutely loved running. In general, I was great at most sports. Despite any lack of speed or agility, at my core, I was an athlete. As the years went, I faced personal hardships, and though I don’t blame those difficulties on my weight gain, I can admit that I lost sight of my general health and appearance.

To begin, the first picture in my Before and Afters was taken during my college graduation in May 2012. I avoided pictures at all costs because I hated the way I looked. Although I’m so glad I have it today to share. My graduation should have been one of the happiest and proudest moments of my life, but it really wasn’t all that. Academically and intellectually, I was a master. I graduated magna cum laude, won business awards and competitions, interned at some of the world’s biggest companies, but something was missing. I had so much control over some parts of my mind, but in others, I was powerless. Maybe oblivious is a better term. If you’re into fitness or athletics, you know that the mind is everything. Your mentally is what gets things done; not the body. At that time, however, I didn’t know that I was lacking a piece of me. I just knew I was fat. Despite this, I didn’t do anything about it until about January 2013. That was shortly after the second picture was taken. After that picture I gained about 20 more pounds because the holidays came around starting in November. I slowly struggled to diet and exercise, but it was hard, and I didn’t know what I was doing. And it was a wake up call when I stepped onto the scale. I was shocked, mortified, and I almost couldn’t believe it. I knew I had a long way to go, and I knew I couldn’t sustain a “diet” for the duration. What I needed and realized in April, was that I needed to change my life.

And almost instantly, I began to eat healthier. I ate about 90% clean. Meaning, I ate natural, non-processed, or minimally processed foods. I fueled up with fruits, vegetables, lean proteins, and whole grains, all made or cooked in a simple way. To this day, I still eat that way, although the ratio is a little more lenient these days. About 80/20. Yet, the amazing thing is that I’m still seeing results! But more on that later. At that time in April 2013, I educated myself about nutrition. Everything and anything there was to know about nutrition and food, I wanted to know. I wanted to accomplish something serious, so I had to do some serious research. And the more I learned, the easier it became. Eating right became second nature. I was immediately happy with my new eating habits, and even more pleased that I never had to diet.
Now, the exercise part of my journey is one of my favorites to discuss. I had a gym membership, but wasn’t using it since I was waiting for the opening of a new gym in my neighborhood. So since I love running, I began to exercise at my old high school’s track after school. I smile in amazement at how far I’ve come when I think about gearing up everyday with my running shoes, music, sunblock, and sunglasses. I jogged about an 8th of a mile, while walking 1/2 a mile, then stopping for water, then going a little more and calling it a day. To me, at that time, that was my max. Between the walking and water breaks, I was pathetically doing a 20 minute mile, easily. More than double the time it took me in high school on that very track. I didn’t care though. I felt amazing afterwards, and I knew I would come back the next day and do it again. However, to my disappointment one afternoon, I see that the track and field is holding an event. I contemplated going home until I looked down at my car-key ring and remembered that I had a gym membership. I was so unprepared for the gym in many ways, I thought; but that day I went to the gym, and I haven’t looked back since.

Today I don’t exercise. I train. I train like an athlete, and I do it because I love it. I’m addicted to the power, the speed, the progress; and I can’t imagine myself ever stopping. The third and last pictures were taken a year after the second and 8 months into my weightloss journey. That’s 75lbs. down. I have 3 months until I hit the year mark of my start date of April 2013, and I hope to lose 25lbs. more, to complete a 100lbs. weightloss in 1 year.

I’m telling you right now, DON’T GIVE UP. Even though I started in April, it took people until about July to notice my progress. That was almost 4 months. Every week, and most certainly every month I could see the progress, but not others. I didn’t let that stop me, and you shouldn’t either. Remember that at the end of the day, you’re the only one that matters on this journey. Because when all the vanities and public have left your site, you’re doing this for yourself. Whatever time it takes, let it happen. The longer the journey, the stronger you’ll get. For example, by the time I reach my goal weight, I’ll be deadlifting more than my own weight. I’m actually more excited about that than the actual weight loss. So don’t despair. Keep going, surround yourself with positivity, and believe in yourself.

I’ve created various social media profiles so we can all share this journey together. We all need motivation, inspiration, encouragement, and education. So follow me and I’ll help in any way I can.