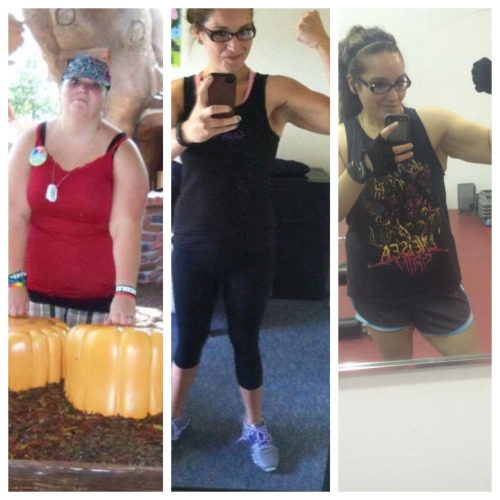 I just wanted to give myself and others some perspective on my journey! This isn’t an ordinary before and after obviously! And no I didn’t mess up the order of my pictures! Hehe
The picture on the far left was from 2011-2012.. I was morbidly obese weighing in at around 300lbs. The picture in the middle was me around 140-150 and I thought I looked great.. This was taken in maybe 2013 early 2014! But in reality I had a horrid relationship with food! I lost my period and I restricted so much! The picture on the far right was about a month ago!(2015) I now weigh about 195(ish)! I have a much healthier relationship with food! Much healthier relationship with the gym! I now love going to the gym! It’s part of my life! Yes I’m chubby per se! But I love myself and I have come so far from both of the other pictures! Now I lift heavy 5-6 days a week(of course with some cardio in there)! Actually have friends!! And have a more healthy relationship with food! Lovelies recovery and change is possible! Anything is possible once you put your minds to it! !

I just wanted to give myself and others…
Tags: Weight loss, Fat loss, Before and after photos.