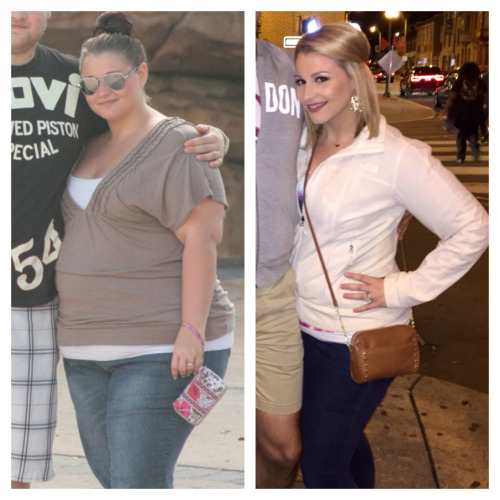 2011 to 2015. The picture on the left isn’t my highest weight and the picture on the right isn’t my lowest. I am 275 in the first and low 190s in the second (I am 5’7). I didn’t start taking weight loss seriously until a couple months after the first picture in 2012 at 300 lbs. I lost about 70 lbs the first year and slowly chiseled away at the rest in the remaining time. By the time of my wedding in October 2014 I was down in the low 170s. I gained some happy weight afterwards and am determined more than ever to get to the finish line this time.

How did I do it? Good old fashioned dieting and exercise. I experimented with different amounts of calories until I found a sweet spot where I was seeing mostly consistent weight loss (between 1300 and 1500). As far as exercising, you have to find something that makes it fun for you. In the beginning, just getting myself to the gym was a feat. I remember the first time I ran 1 minute on the treadmill I cried because it’s something I hadn’t been able to do in several years.

Now I mostly enjoy lifting with a little bit of cardio mixed in here and there. I get a lot of satisfaction from lifting and love seeing where my strength started and where it’s gotten to.