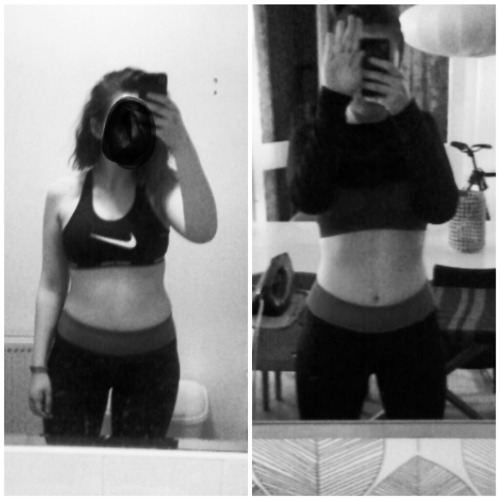 (Sorry the pictures are blurry! I don’t have a great phone.)

I’ve had body issues since I was around 13/14 years old. I’ve tried a million fad diet plans and ‘miracles’. The simple, obvious route is most effective: eat/drink healthy & exercise.

On a 1,200 – 1,300 calorie diet (give or take). It was very hard for the first month or so but my eventually adapted to it so now it’s much easier. I try to eat mostly clean, healthy foods and drink plenty of water. I work out for at least an hour or two a week (currently working on doing more). I lift weights almost everyday.

I’m 5’ 4″. I don’t really want to share my weight because I’m not happy with it yet. I believe I’ve lost about 7 pounds. Which isn’t as much as I’d like, but it’s something and I’m very happy so far!

– Please don’t tell me 1,200 calories a day is too little – it’s the minimum calorie allowance for a woman of my age, weight and height.