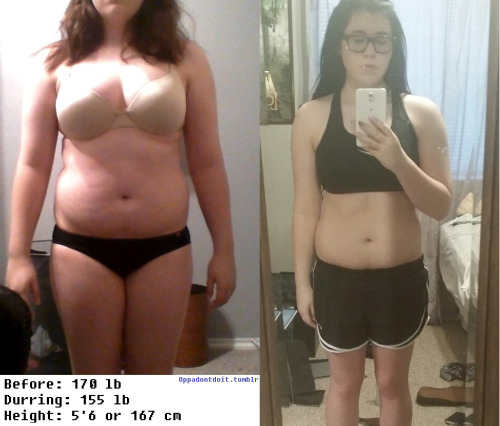 So, WOW, I never expected my 1st before and after picture to get such a big response! I also wanted to say thank you to all the kind and motivating messaged I’ve received the past few days! I’ve got a pile of messages in my inbox asking how I’ve lost the weight thus far, so I’ve decided to make this post about it.

A little back story, i used to suffer from bulimia, the summer before my freshman year of HS i went from 140 lbs to 97 lbs in about three months, by excessively working out and purging everything i ate besides fruit. After recovering my metabolism was shot and my weight skyrocketed to 180 lb, and i was very depressed and mean. Finally after a few years i chose to fix the problem in a healthy way. My weight loss has been over a year long process. I’m not very intensive because i don’t want it to be an obsession again. I walk for 30-60 mins a day,do a lunges till it gets hard, and light hand weights for my arms, and i still eat whatever I want, just in smaller portions. Im still far from my goal and its still not always easy to look in the mirror some days but I’m a lot happier than I was.