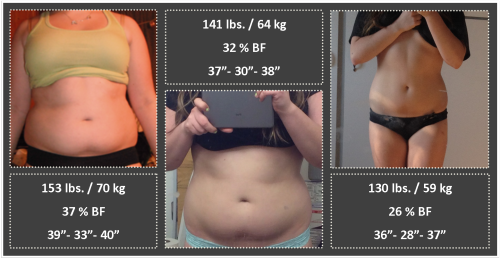 Over the progress of a little over a year I have lost 23 lbs. or 11 kg. At barely 5’2” tall it’s made a pretty big difference. I began my weight loss during the summer of 2013, though I had been working out earlier without losing weight, and was in better shape than I had been in a couple years, if bigger, A lot of my loss had to do with eating cleaner, with cutting out as many processed foods as possible, but I also began to enjoy long distance biking, and use it as a method of getting place to place. Over that summer I biked around 1500 km in total, even riding 110 km in a day at one point.

The second photo is from fall of 2013, after I had lost 12 lbs. I maintained this weight until last summer, when biking again helped me to lose weight, along with calisthenics and some weight training to build muscle. I’m continuing to work out, and while I don’t have a number goal in mind in terms of weight I’d still like to get down to around 22% BF. Overall I feel healthier and more energetic than I ever have, at 130 lbs. in the final picture.

Over the progress of a little over a year I have lost 23 lbs. or…
Tags: Weight loss, Fat loss, Before and after photos.