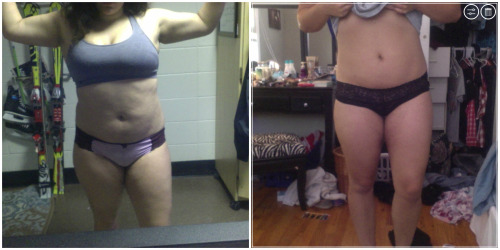 Its been about 4 months of seriously working at it.

In January I started to lift and lift heavy but didn’t really fix my nutrition. While I saw crazy gains in my strength and my clothes fit a lot better, my weight didnt budge and for awhile I was okay with that. I felt strong and I felt empowered even if I was still considered heavy. Then in the beginning of March I started to focus on my nutrition and decided I wanted to cut. So I stopped lifting super heavy, ate very clean and added cardio which sucked because I was a smoker. The weight started to fall off and my body felt better than it ever had before. I still eat relatively clean but its pretty hard when you are a waitress at an Olive Garden. I never really deprive myself of something, I just stopped binging. I’ve also quit smoking cigarettes and limit my drinking to a beer or two on the weekends (not going to lie, sometimes 6). I’m still exercising and lifting but not quite with the same intensity due to no longer being in college with a free gym and working about 35 hour weeks but I continue to see improvements. Mentally, not just physically, I’m in a much better place which was actually the reason why I started to go to the gym. I gained about 50lbs the last 2 years of high school due to depression and in January I decided to do something about it. With physical strength came mental strength and thats not something I’m ever going to give up.