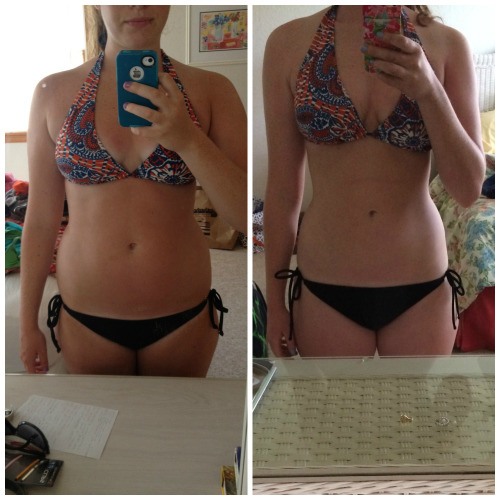 I took the first photo in June 2012 when I was at my highest weight of about 155lbs. I exercised heavily at this time, often pushing myself to the brink of exhaustion and injury, but I was also trapped in a cycle of restrictive and binge eating which made it impossible for me to get in shape. I was tired all the time, and had terrible head, neck, and back pain, and stomach problems.

The second photo is from June 2014 when I was about 140lbs. In the intervening period, I had been diagnosed with a chronic illness which explained a lot of the symptoms above, and also included a handful of food intolerances. I turned my focus to getting my symptoms under control, and put a hold on the exercise. I developed a healthy eating plan free of the foods which were made me ill, and slowly I developed the ability to eat intuitively, and indulge without binging or restricting.

I now eat according to the FODMAP diet, as prescribed by my doctor, and practice yoga several times a week. The transformation shown above does not simply represent a wight loss of fifteen pounds, but also a triumph over my illness, and a transition from sick and self-hating, to healthy and (mostly) well-balanced. While I’ll always face set-backs, I hope to always move in an overall Upward Trajectory.

I took the first photo in June 2012 when I…
Tags: Weight loss, Fat loss, Before and after photos.