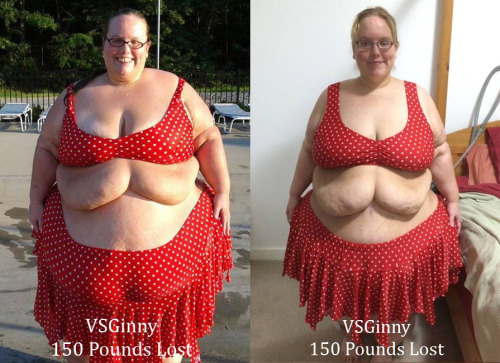 Lost so far since surgery: 39.6 pounds

When I would think about losing weight previously, I would always get frustrated because I would think “I have sooooo much to lose! More than most other people! It will take foreeeeever!” It felt overwhelming. Well, here’s this photo, and photos don’t lie – if you have that attitude, you’ll only get bigger. Start TODAY. Start NOW. Because if you don’t, you’ll only have farther to go when you do start. It’ll take you a year to lose that weight healthfully? Two years? Well, okay – where will you be two years from now? Wouldn’t you rather be doing whatever it is you’re doing in a healthier body? Two years are going to go by regardless. Make them count.

I lost 111.8 pounds on my own, mostly by going low-GI (glycemic index) and just walking around and exploring the new city I had moved to (Sydney. I’m originally from the US). When my weight plateaued eventually, I tried low-carb/keto instead and lost a little more. About the time my weight plateaued from that for a few months, I read an article in a scientific journal about how many ways your body has when you are super morbidly obese to make you hold on to the weight you’re trying to lose. It was at that point I decided to make the playing field a little more even and have VSG. I have nothing but respect for people who can lose this much weight without surgery, but I’ve spent most of my life trying various types of diets/lifestyle changes and my body was just too adept at hanging on. So I gave it a kick in the pants and had surgery. I don’t regret it for a second.

I’ve still got a loooooong way to go, so I’m keeping myself accountable in as many ways as possible – by posting on various forums & Facebook about my progress, by posting photos like this on Tumblr (never thought I’d post my ~600 pound bikini shot here for the world to see!) and by doing weekly update videos on YouTube.

When people see me walking down the street at the size I am now, they probably think all kinds of derogatory (and incorrect) things about me, my activity level, my eating habits, etc. Remember before you judge someone (much less say something rude to them out loud!) that you can never know just how far someone has come from where they started.

PS – YOU, yes you, have a bikini body RIGHT NOW. Know how you get a bikini body? You’ve probably heard this, but – put a bikini on your body. Seriously. With my body shape, I couldn’t move around well enough in a one-piece to do water exercise at 600 pounds, so I wore a bikini to the pool several times a week. No one died. No one fled in terror. No small children burst into flames. Seriously. If you want to wear a bikini, wear one. Life is too short not to do what you need to do and be the person you want to be.